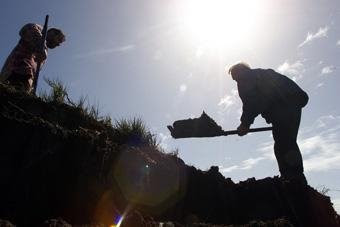 We never talked about God, and I was almost sure that Frank was an atheist, even after he told me his grandfather was a priest. If he had ever asked me, I would have told him without hesitating that even if God existed, I would reject Him. But now I don’t think Frank would have agreed with me. He held peacefully onto a belief he never spoke of. I could always tell by the way he moved when he was physically tired from farming that he counted on his strength to come from something beyond his body. I began to imagine what he felt when the fields were waist-high with wheat and my own body was exhausted from the last months of pregnancy. The summer winds made depressions in the bronze grass like giant, restless lovers rolling on a bed of satin sheets. If this invisible force were the hand of God, I thought, running its fingers with so much love through the hair of its only child, I would let it caress my entire being.

My baby Emily reminded me so much of my brother Jeff that I missed him more than ever. She took in the whole prairie with her eyes the way Jeff had as a baby in my eight-year-old arms. She let herself see things that adults don’t believe they can see, believing instead that the thing before them is just too big to be comprehended, so they stop looking. She noticed every bit of movement and pointed at every piece of machinery in the fields, identifying them all as he daddy. Watching her, I imagined myself in my mother’s arms on Baraterre experiencing the ocean. I thought sometimes that I could remember the blue of the ocean even though I knew that was impossible. In that false memory, the prairie must have been my ocean, the golden color of the waves recorded for some reason in its negative, blue.