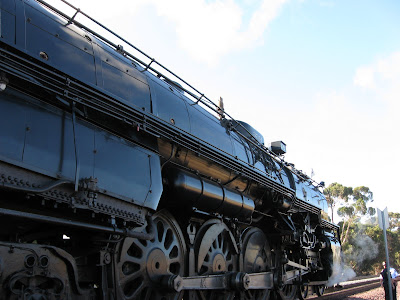 I am a steam punk. I like things that are big and loud and, where appropriate, Victorian. I have paid good money to get into tractor pulls, and when I didn’t have the money, I watched through chinks in the wall. In the days before airports were warzones, I’d stand in the bed of my pickup truck at the business end of Lindbergh Field and imagine I could stroke the bellies of ascending planes. I like machines that are clumsy and elegant at the same time. Hulking behemoths as delicate as a Swiss watch. Metal and oily exhaust. Bellicose, quarrelsome, cantankerous, and precise.

As I drove home from work yesterday, almost to my exit, I saw a train stopped on the tracks paralleling the freeway. This isn’t unusual since my neighborhood has a lay-by for passing trains. But there were people and police cars hanging around the locomotive, and at first glance I was afraid there had been a horrible accident. There was something weird about the engine, smoke curling away from the top—my god, it was a steam engine. Not only that (by now I was off the freeway, heading for the frontage road) it was a steam engine pulling a train of 22 vintage Pullman passenger cars.

Apparently a group of private railcar owners was having its annual gathering in LA. They chartered an antique steam engine to take them daytripping from Union Station to San Diego, and the Pullmans were parking in our siding for the day. The locomotive was soon detached from the train and before I could get parked and down to the siding, it motored off South to an Amtrak station to be picked up by a diesel engine that would take it back north of its own passenger cars in the lay-by. That was the beginning of its four hour odyssey to and from a turntable, prepping it for its return trip to LA.

I summoned my husband and kids at about the first half-hour mark, and the wait for the steam engine to return was excruciating. I really thought nothing could be worth the effort it was taking to stave off fatal boredom. I worried what the kids would think when it was all over and they had spent their whole Sunday on a weedy dirt bank. I apologized to my husband for no reason.

Then it came. It came backing down the track with the two diesel engines that power-assisted amenities like lights and AC for the passengers. At last it slid into the coupling of the last Pullman car. It was ferocious and complicated and enormous, but it could move an inch at a time. 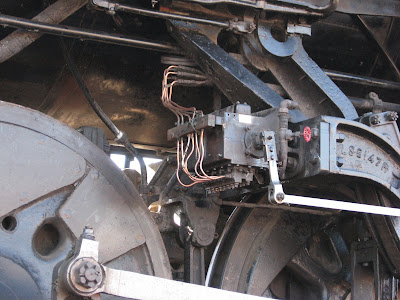 I won’t try to describe it. (Its wheels were 80 inches in diameter.) I don’t have to tell you if it was worth it. At this point either you’re with me or you aren’t. The steam engine stayed in our humble siding for the next hour while the Pullmans’ combined crews got the passenger cars powered up. I could have let my eyes wander its surface of glossy geometry and grainy curves for the entire time, but my son insisted that we stay poised at a distance down the track that would allow us to see the massive pistons and wheels at speed when the train finally left. (Good call.)

It was an amazing day. Something I couldn’t have planned and would never have committed to even if I could have planned it. There were instances when the anticipation and awe I felt toward that locomotive must have been identical to what someone would have felt a hundred years earlier the first time a steam engine came into their world. I think yesterday was no different than a day at the beach—a full day spent in anticipation of something looming just beyond the horizon (it was always supposed to be here any minute), and when the thing arrived, kind of like the way it feels to look at the ocean, it brought a raging stillness.