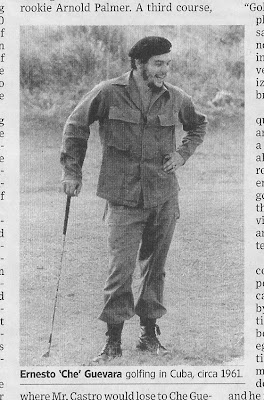 I dreamed the other night that Che Guevara was coming to my house for dinner. It was a very large house, and it was a very large dinner party. I knew that Che was not going to be there for very long because he was very, very old. So I had my eye out for him because I wanted to ask him how he liked Benecio del Toro in the movie.

Just as he was about to arrive, one of my guests—never seen him before–said he was dying for some oatmeal…literally, dying. There have been some comments in the past, internally among my household, that I am not the most accomplished of hostesses, so I couldn’t just blow the guy off. I knew I had some instant oatmeal in my kitchen, but you know what? When I got there it was my parents’ kitchen, and it was enormous. It was rooms long, filled with dark, disorganized cupboards, and the cupboards were filled with old, mislabeled food. I kept finding stuff that looked like it could be instant oatmeal—no, that one was drain cleaner. I could try cooking this other one, but it might not be food. One way or another, it looked like that guy was out of luck.

Now Che was arriving, but I was stuck in the kitchen trying to make oatmeal for the guy who was dying—by now, he was lying nearly unconscious across the laps of several other dinner guests. All I had been able to find was old fashioned oatmeal. It had to be fully cooked. Che Guevara left, and I never got to meet him. I have no memory of the fate of my dying guest.

I hope Benecio del Toro is good in the movie.