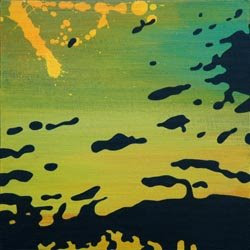 An installation at the San Diego Art Institute, June 2009

I’ve always loved the expression “You can’t dip your toe in the same river twice.” Everything changes, everything moves on, even when you come back to it in the same place, offering the same bit of yourself to it as you did before. Artists often seem to be taking on two contradictory tasks at once—the preservation of a moment in time, along with a celebration of the fully writhing, changing nature of life itself.

Michele’s second solo show at the San Diego Art Institute has that dynamic. It is both a presentation of her most recent individual works as a painter as well as an installation of beautiful snapshots within a single context. The pieces, all square but of varying sizes and thicknesses, are loosely grouped in thematic ribbons over a large suite of silhouettes that are painted on the walls. The images are not fixed to one another like chapters in a story. If there seems to be only a hint of a narrative here, that is for good reason. They are moments, Michele says, but they are not frozen.

As Michele showed me a preliminary version of the installation you see at SDAI today, we placed the paintings on the hardwood floor of her home. Her children are completely at home with artworks within arm’s reach, and as they made their way in, out, and through the room, they navigated the squares on display as though the paintings were anti-stepping stones. I had to remind myself to stop holding my breath—this is their life, after all, they know what these are. The paths of their bare feet between Michele’s paintings were the incarnation of C’est la vie. Life goes on around you even as you are stopping to contemplate a still life.

With the paintings on the floor, Michele and I talked about an installation we saw in LA last year of handmade stuffed dolls. Each doll had been the result of an experience the artist, Vanessa Matthews, wished to externalize. One doll, for example, was catharsis after anger over a parking ticket. The dolls were individually for sale, but the presentation of all the dolls together, hanging from the ceiling, was most effective. They were funny, cute, sad, and confusing. They were enough of a curiosity that they defied you to leave the room without learning more about them.

Michele feels that the images in this show fulfill a similar need to externalize moments in her life. Most of them have people—sometimes strangers she has photographed at the beach—as the central form. Typically, her landscapes are almost deserted, the ocean is empty. But in this installation, at the same time that her landscapes are like sanctuaries, they make a human connection. Abstract shapes that mimic sea life and tide pools illustrate a bridge between Michele’s mother, a marine biologist, and Michele’s embrace of the natural world.

The clean silhouettes have a way of making Michele’s art look effortless. Does this bother her? When I ask her about it, she says, “The digestion process from photo to painting….is….,” then she looks at the ceiling with outstretched hands. But in the end, that is something only she will know about. “I don’t want it to look like I spend a thousand hours on everything.”

Looking back on Michele’s first solo show at SDAI last year, I am so impressed with how much this river has changed. The change in the scale of her work is most notable, but it is not the only thing that has grown in the year that has passed. Her paintings work together like pieces of a language that is still evolving. As soon as she began to think about this show, Michele says, she knew that she wanted to do something completely different from her previous solo show. She loved the idea of very large scale works, but over time, largeness started to define itself as many small things happening at once. That is life, and to be as large as life is to experience a multitude of tiny moments at the speed they are thrust at us. The great surprise for us is that Michele’s new piece is both the single sweep of the wall in front of you and these many small things that compel you to stop and wonder. The resulting ensemble is appropriately temporary—it will disappear when this wall is handed over to another artist—and the individual pieces will never be presented in this way again.

This is a river. This is life. Michele doesn’t want or need to demonstrate anything. “C’est la vie is about accepting things which are happening without necessarily being resigned,” she says. “I may be less interested in fighting than in finding a way to live in the present.” 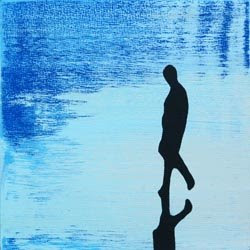 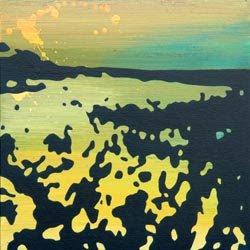