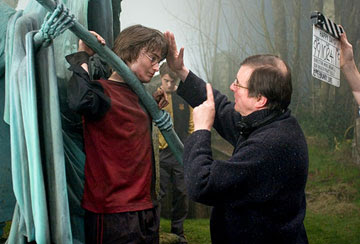 Dan Radcliffe and Mike Newell, the director of ‘HP and the Goblet of Fire.’

I may have to revisit this topic again. As I said at the beginning of the week, I have a fascination with observing actors and directors at work. There is an interesting power structure in that relationship. The director of any production has the final word on the set. It’s his/her vision that is being expressed and fulfilled. But that can’t happen without the actor as his conduit. The power, though it is still the director’s, ends up in the actors’ hands.

I could do a week of posts with just pictures of Daniel Radcliffe and directors.