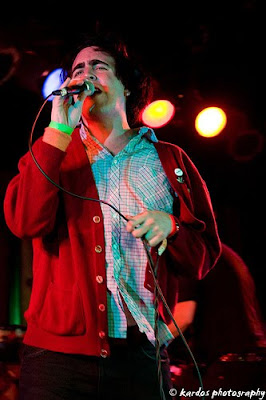 This is for Friday. Ankle is resting comfortably, time to kill, blah blah. I do wish Blogger would let you save an unfinished post and date it on the day you actually post it, but no, it has to be dated on the day you start it. So it goes.

This post, of all the posts this week, features the picture that makes me happiest of all, happy with memories. I don’t get to see Eddie very often, but on this particular evening–the one pictured– Art Brut was playing here in San Diego at Cane’s down by the rollercoaster and the ocean. Eddie and our friend Keith snuck up behind me while the opening band was on and tapped on my shoulder. This was startling simply because Eddie is quite in excess of six feet tall. Keith gave me a button I’d been coveting from their first band, The Art Goblins, and Eddie and I had a good laugh over the button I’d brought him, one that said “I [heart] Dan Radcliffe.” Through his fans’ enthusiasm for his excellent taste in music, Daniel Radcliffe had pretty much put Art Brut on the map. Eddie put on the button and wore it for the show, see above, the white one on his sweater.

Keith and Eddie finally met my husband, Sean, that night, and Eddie’s girlfriend Dyan was in the opening band, The Blood Army. Art Brut played second, like the middle child, and the final act of the evening was The Hold Steady, Eddie Argo’s own personal favorite band. By that time, Eddie had been on the road with his idol, The Hold Steady’s frontman Craig, and Eddie was over the moon. The night at Cane’s was a lovefest. When Eddie did his customary wander through the audience during “Modern Art”, he gave me a little wave. I beamed. In the background of another photograph that was taken that night, you can see me glowing.