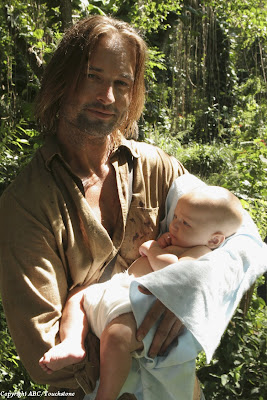 I’m going completely off the grid today. That’s what ‘Editor’s Choice’ means. Heck, that’s what “It’s my blog” means, I can do what ever I want.

Josh Holloway is not British. But I had to show you this picture. It was taken on the set of LOST by photographer Mario Perez whose brilliantly candid shots have given us more than a glimpse of what life has been like for the cast and crew.

Josh has a baby daughter, his first child I think, who turned 1 a month or two ago–I learned this from Jorge Garcia’s blog, along with the proper way to eat a cupcake–but this baby shown in Josh’s arms is not Baby Holloway. This baby is an actor baby portraying Baby Aaron, son of Claire, and this picture would most likely be from around the time they shot the episode where Claire abandons Aaron in the jungle. Sawyer, Josh’s character, is the one who discovers Aaron lying on the ground. I remember thinking at the time I saw the scene that he was surprisingly tender with the baby.

Well, my long explanation is about this: The episode was in Season 4. S4 was 2 years ago. Ergo, Josh was just about to start his family, in the sense that his daughter was still “a candy bar in her father’s back pocket,” as Laurie Anderson says. Now look at his face in the photograph. He is sooo ready to have kids, you can see it in his eyes. I remember once when I was interacting with a stranger’s baby in a shop, my best friend poked me and said, “Yeah…you’re ready.”

Sooo ready to be a daddy. Very cool, and of course, incredibly sexy.