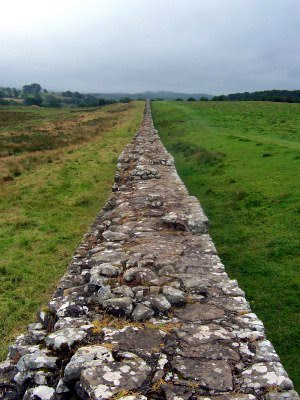 I’m reprising all I’ve previously posted of my short story “Hadian’s Wall” here as a single post, in prep for finally finishing the piece.–Ed.

PART 1–THE GIRL WHO STAYED AT SCHOOL OVER THE BREAK

I was pretty sure I was overdue for a tetanus shot. And maybe I needed stitches.

It’s amazing what medical services you can get for free at the university infirmary in 1983. The weekend before Christmas and I am locked out of the dorm. I found a first-floor window unlocked and was hoisting myself in when I got a good-sized gash on my forearm from a rusty nail in the window sill.

The cold New England air made my arm sting as I walked to Student Health. Most of the students were gone for the holiday, and so the evening seemed to fall particularly hard and fast with no lighted windows in the campus buildings to cushion the feeling of being completely on my own. I tucked my bleeding arm into the kangaroo pouch of my Yale sweatshirt, and by the time I walked through the glass doors of the infirmary, the blood had soaked through making the navy fabric turn glossy blue violet.

The infirmary was understaffed because of the break, I guessed, but there seemed to be no other patients either. No one was in the reception cubicle; then a nurse came out of the big common treatment room that lay behind the front desk. Her eyes widened. I think that’s where I fainted.

When I opened my eyes, I was lying on the floor and a doctor was kneeling beside me, looking purposefully into my eyes, one at a time. Between him and the nurse and another girl who wore a sweatshirt under her scrubs, they got my limbs untangled and began to assess the damage.

The doctor lifted me in his arms and put me on an exam table in the big room. “How’s your head?” he asked.

“It’s my arm,” I said softly, and tried to extract my arm from the bloody pocket now resting on my stomach.

“My head doesn’t hurt,” I said. “I don’t remember it ever hitting the floor.”

The girl in scrubs brought over a tray, and they began cleaning my arm. The doctor said I needed some stitches and went to a cabinet across the room to get supplies. With his back to me, he asked me how I hurt my arm, and I told him. When he came back he asked, “When was your last tetanus shot?”

He looked to the nurse who had come in, but he spoke to me. “Let’s get your name and we’ll check your file.”

“It won’t be in there, ” I said. “I didn’t know the answer when I filled out my health form freshman year.”

“Then let’s just start with your name.” He smiled. The nurse handed him a clipboard with forms on it.

“Opal Solomon.” He wrote that on his clipboard. I asked, “What’s your name?”

“Dr. Forester.” He smiled again, a little awkwardly. “Ethan Forester.” He had kind eyes. He was young and had that soft, empathic look that young doctors have. When he turned to give the clipboard to the nurse, I missed the eyes and their warmth immediately.

After he stitched up my arm, Dr. Ethan Forester set it gently in a sling. As he was making his final notes in the chart, I sighed “Oh no, I never did get through the window to get my keys. I’m still locked out.”

“What are you doing here over the break anyway? Aren’t you scared of being in the dorm by yourself?” he asked.