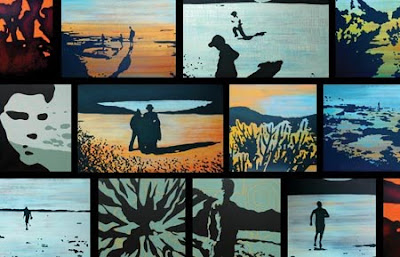 As I post this essay, I want you to know that this is the highest achievement of an otherwise melancholy day. My daughter is home, uncharacteristically sound asleep with a sore throat, right on the heels of her younger brother having a cold. No surprise, but when I think of how fleeting the summer break between school years is, I don’t want them to miss a moment of it. She’s missing a girl scout camp called Girls Empowered to Make Movies–GEMM–it’s just as wonderful as it sounds. I want her to be there, not home sick.

I’m in mourning for my country, an inescapable mourning that does not dissipate when I go to my “Happy Place” a long, long way from here on an island or in Scotland. The cap on the Horrible Offshore Oil Well in the Gulf has been knocked off by a robot, of all things–as in an 8-year-old’s nightmares–and oil is spewing into the gulf again, the Ocean, at a rate as unchecked as ever. Tar balls were discovered along nine miles of coast at Pensacola Florida this morning. Observers were described as silent, silent. My home, the outer banks of North Carolina, is just around the geographical corner. It could be there later this summer.
I’m in mourning for my country, and I want to know what kind of drugs Michael Hastings of Rolling Stone put into McChrystal’s drink. Whatever it was, what ever was done, it was poison.
More than ever, I need to be in the company of artists. Women. Writers. Friends and “Friends.”
I’m proud to have written another essay expressing in my own way the heart and soul of Michele’s work, as I am so honored that she has asked me to write one again.

Correspondences and Elevation:
An installation of Paintings by Michele Guieu

“It’s really a group,” says Michele, “and the group could evolve…it’s possible to make this piece live.” Michele has just guided me into the space that now, for the third time, hosts a solo exhibition of her work at SDAI. Seeing the installation “Correspondences and Elevation” for the first time reminds me of what it’s like being introduced to a tall, well-built man—not overwhelming, but it holds an aura of authority, and at the same time it is a joy to visually behold, to flirt with.

In “Here It’s Peace,” Michele’s 2008 solo installation at SDAI, each piece was individually titled and owned its own space even though the whole of the show was much greater than the sum of its parts. This new show is simply one piece, one title. In 2009, in her show “C’est La Vie,” the separate canvases had a very organic relationship to one another, displayed on a mural-sized silhouette of human figures on the beach. Now in 2010, the canvases are like frames from a roll of 35mm still photo film, the images brought into soft focus by knowing that the installation’s title derives from two beloved poems by Charles Baudelaire.

Other than as a Photoshop mock-up on her computer, Michele could not see this piece in its entirety before installing it here. “There was not even enough room on the floor to do this at home.” The canvases are uniform in height and vary with widths of 36”, 48” and 60”. Their size contributes to the drama of the work—drama that is developed without being political. The emotions evoked by “Correspondences and Elevation” defy expectations of what a piece about family, home, and place should be. “I feel like I’m going forward,” Michele says. Her growth as an artist here is an expansion of the direction we saw her work take at Art Produce. The installation she did at the North Park gallery earlier this year, “Lucy, Darwin, and Me,” was a tribute to Charles Darwin, nature, science, and family.

In “Correspondences and Elevation” newer works are not seamlessly camouflaged among the older pieces. They are, instead, allowed to be bold in a way that shows a new generation has come of age in a family. Some of these canvases predate my own acquaintance with Michele and therefore predate her first solo show here two years ago. On the other hand, some of these are so new that, as I stand here a day before the opening, they are practically still wet.

For Michele, that which is personal extends to her family and the ocean and beach that she loves. Each of these frames is imbued with the sense that it is a personal favorite, each in its own flavor. The work as a whole, then, feels like a big box of See’s Candy, personally selected to include as many favorites as possible, while each individual piece is a work of art.

Michele is definitely moving forward. The newer pieces have achieved a manipulation of color and texture that I’ve never seen in her work before. “Nothing is fake,” she says. “I connect to the place I live; I’m super-connected to my family.” Interaction with nature is an inescapable theme and fact of her life. “I was choking in Paris. I need those [natural] places.”

These images come at a time when remembering natural spaces could make us profoundly sad. While “Correspondences and Elevation” doesn’t specifically address the present catastrophe in the Gulf of Mexico, it certainly addresses what we have to lose. Eighty percent of the world’s population is now urban, Michele tells me, so people on the whole are completely disconnected from nature.

Images here that are just plays on the light contrasting the dark can seem like odes to things coming apart, like sides being drawn in a battle, and can be as disturbing as deep shadowy places often are. But the political fallout of our failure to protect nature does not underlie this show; it is simply Michele’s appreciation of natural beauty.