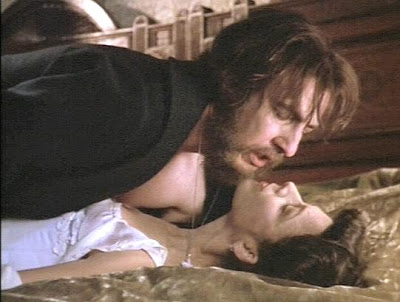 Diana Gabaldon really isn’t going to like this, but this week our ensemble cast will be outfitting some of the key the roles from her Outlander novels. It’s kinda like I’m the casting director for a movie that doesn’t exist. Keep in mind, however, that I’m only half way through the third book.

First up is Alan Rickman as Dougal MacKenzie, uncle to the co-protagonist Jamie Fraser. Wikiped describes him thus:
Colum’s brother, who serves as the literal and figurative “body” of the pair, since [Laird of the MacKenzie clan] Colum’s health meant he is unable to lead the clan into battle. A Jacobite; biological father of Colum’s son, Hamish; took Jamie on as a foster son for a year as a teen; has four daughters. He also fathered another son with Geillis Duncan.
Perhaps that’s Geilie now with the figurative body of the laird…