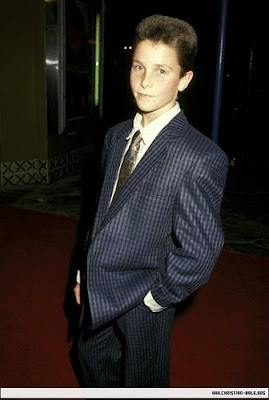 I barely remember Christian Bale in ‘Empire of the Sun’ because I really didn’t like that movie. There is such a disconnect for me between the child in this picture and grown up Christian Bale, the actor we love today. But the future man’s face is there in the boy, the lovely eyes, the beginnings of dimples, the curves of lips and nose that are so distinct.

I would love to have seen him in a TV movie [mini-series?] he made even before ‘Empire of the Sun’, in which he played Alexei, younger brother to the mysterious Russian Princess Anastasia.