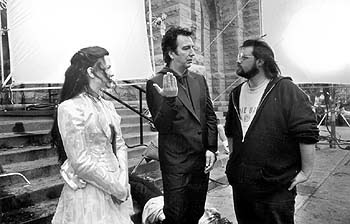 I’m devoting this week’s posts to filling in some gaps. It came to my attention that not all of the cast has participated fully in each and every theme. It has also come to my attention that some things that I thought had never been committed to still photography have in fact been not only archived for posterity but put up on the internet for all the world to see.

This first one, however, was just a silly oversight. How could I not have posted a picture of Alan Rickman that makes me happy? Perhaps it was too hard to choose just one. The scene above, when I first encountered it, made me giddy. It was enough that Kevin Smith cast “The Sound of Oil Dripping on Velvet” to be the voice of God in his black [black, black, black…] comedy “Dogma”. It was enough that Smith reprised his role as Silent Bob. It was what I like to call a ‘Harold-and-Maude’ moment–a point in a comedy where you either have to jump in with your clothes on or leave the theatre–when Chris Rock speaks of Jesus as ‘the n___r died owing me ten dollars.’ But when the God Rickman was the voice of turned out to be…..well, you might not recognize her in that picture up there, and you might not want me to spoil the movie now.