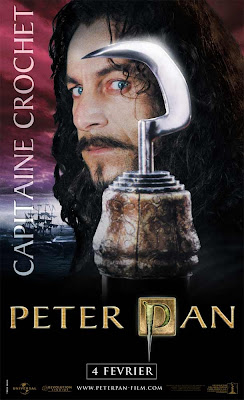 Jason Isaacs was absent the week we saw the cast in print. A scan of an in-depth interview would have been nice perhaps. But this item [above] will not lay down and be still; it must be seen and enjoyed. It’s a French poster for the film ‘Peter Pan’ featuring Captain Hook, or as he is known in the local language, Capitaine Crochet. Visions of my grandma as Tinkerbell! An afghan in the shape of a crocodile! A trip to Michaels’ for yarn, anyone?