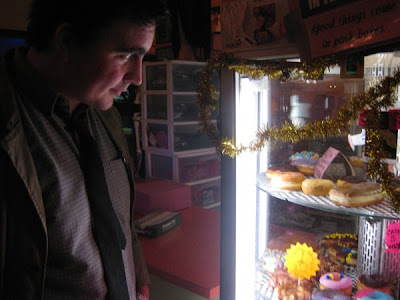 I saw ‘Breakfast at Tiffany’s’ last night on TV. [hyperbole coming up…] I’m a hundred years old but I’d never seen it before. I cried a bit over the cat being put out in the rain rather than over a girl marrying an old guy just shy of her 14th birthday, a plot point that mirrors the story of my own grandmother. Two of my fifty-ish girl pals told me today that they’ve never seen it, which surprised me. Audrey Hepburn as Holly Golightly is such an icon of our girlhoods. Truman Capote as a socialite, more so than as an author, is such an icon of my Merv Griffin/Mike Douglas childhood. People my age probably expect the George Peppard character to turn out being gay. Was Capote ever a kept man struggling with his sexuality? Did my grandmother ever think of running away from the family she wrought at 14 to reinvent herself in a new town?
I ate my breakfast in a rush at the kitchen counter this morning. Fortunes from cookies from last nights take-out Chinese were still on the counter. One of them says ‘sometimes adversity is as needed as medicine.’ Happy new year everyone. Reflect, cry a little, and then move on.