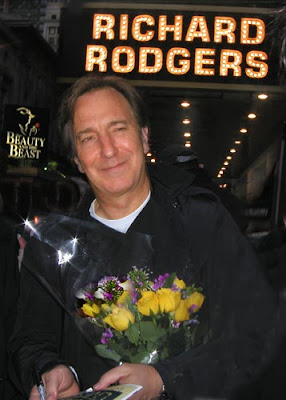 During one of Alan Rickman’s previous turns on Broadway, I got to travel to NYC to see him in ‘Private Lives.’ I did not take a camera, but I did enjoy finding pictures from other theatre goers on the internet that summer. Here he is signing autographs for fans at the stage door of the Richard Rodgers.
As far as I can tell from the photos I saw, AR emerged from the theatre every night wearing the same combination–a white undershirt beneath a dark gray sweatshirt. The night we were there, I saw the digital thermometer at Times Square register 101 F at midnight. I could only imagine that AR had received one hell of a good rubdown after his athletic antics onstage for him to want to maintain his body warmth that badly.