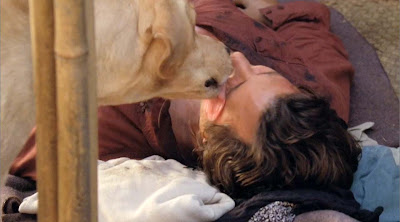 I was feeling kinda crappy this morning, sitting alone in the living room waiting to take one of the kids to school when I heard this yappy little bark out front. I knew it was Boris, my neighbor’s ‘poodle-Yorkie-thingy’, as my daughter calls it. I’m not in love with this dog, but there was something comforting about the familiarity of his voice, the fact that I could tell pretty much where he was in my [!] yard by triangulating the sound, the hope that at least he knew who he was barking at and he felt safe here too.

Then I remembered that I sat for a few minutes yesterday evening with the rats–our pet rats–licking invisible remnants of last night’s dinner off my finger tips and chewing a nail for good measure. It just figures that Whitney would like masala….
I wish I had more pictures of the cast with pets. This isn’t even a pic-with-pets, this is Ian Cusick in a scene from the final episode[s] of Lost. His character Desmond played Timmy’s-in-the-well to Vincent the Dog’s Lassie imitation.