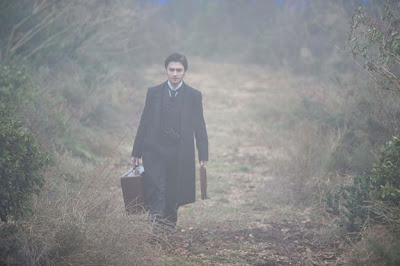 Another production shot from ‘The Woman in Black’ with Daniel Radcliffe. In this image, he could be Cass Mastern, a character in ‘All the King’s Men’ [which I’m still in the middle of reading] who is an ancestor of main character/narrator Jack Burden. We learn the main themes of the novel through Jack’s exploration of his Civil-War-era journals:

Cass’s story, as revealed through his journals and letters, is essentially about a single betrayal of a friend that seems to ripple endlessly outward with negative consequences for many people. In studying this fragment of Civil War–era history, Jack begins to suspect (but cannot yet bring himself to accept) the idea that every event has unforeseen and unknowable implications, and that all actions and all persons are connected to other actions and other persons.
So says Wikipedia. Amazing how every great story arc comes back to the notion of connectivity and personal responsibility.