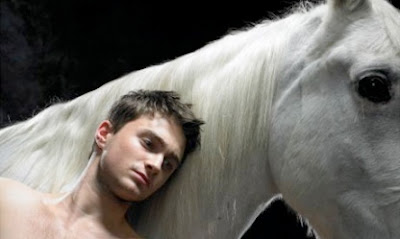 Above, a detail from the photoshoot for ‘Equus’ before it opened in the West End.

There’s a passage in Patti Smith’s memoir ‘Just Kids’ in which she describes the moment she became something more than a poet. She was rehearsing for a poetry reading with the musicians who were going to accompany her. As she recited ‘Jesus died for somebody’s sins, but not mine’, the guitarist played a chord progression. Patti asked if those were the chords to a real song. It was indeed–it was the opening of Van Morrison’s ‘Gloria.’
In a short time, her band would go on to record the album ‘Horses’, the album that would change the possibilities of rock ‘n’ roll, with Patti’s reinvented cover of ‘Gloria’ as the first track.