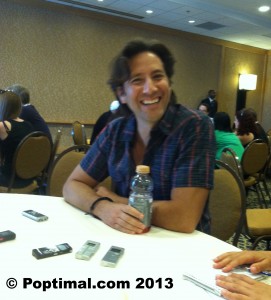 [Not my picture, as you will learn below.]

First I want to say that I never totally believed any of you before, but it’s true—Ian is actually even better looking in person than he is in pictures! I didn’t believe you because I didn’t think it was possible!

So let me go back to last Friday. My son Robert and I got into the conference room where ‘The 100’ panel was to be held about 45 minutes early. The ‘Nikita’ panel was in full swing—boy, there was a lot of love in the room for that show!—so we were in for about a half hour of that. [Side note to sympathetic mom’s: My cunning plan to get there early was already backfiring as 12-year-old Robert was starting the ‘can we leave yets’ and his 3DS Distraction Device was not charged up because late last night his older sister unplugged it in order to charge her own. I WILL DEAL WITH HER LATER.]

After a brief pause between panels, the moderator for ‘The 100’ panel introduced the screening of the first episode, which was shown to us in its entirety. I thought it was great but not awesome—I liked it very, very much, but I didn’t love it with all my soul. By the time the viewing was over, though, even Robert was into it. His assessment was quite accurate, I thought—he said “first episodes are always a little boring” but he can’t wait to see the rest.

Then the lights came up and the cast was introduced one by one, Ian last—which meant, of course, that he was seated on the far side of the stage from where I was sitting. Robert and I had learned during ‘Nikita’, disappointingly, that our phones’ cameras weren’t worth a crap. So I just sat back and enjoyed. [I knew there would be plenty of good pictures online within the hour, anyway.] Ian’s hair was bouncy and lovely [first thing I noticed, naturally] and he was wearing a nifty plaid short sleeved shirt [with khaki shorts, I think]. Everything about him just looked….happy.

Since the episode was about 45 minutes long, the live panel had to be insanely short—about 15 minutes. As usual with these things, the moderator asked some pretty banal questions to get things rolling, and a few audience members got to ask questions too. One woman asked Ian and the lead actress, Eliza Taylor—who is Australian—to comment on having to act with an American accent. As context for this, it helps to know that in the episode, Eliza’s accent is so perfect, it was actually quite a shock to hear her speak in her native accent. And Ian’s American accent? Sorry, not as good as all that. But we knew that—it’s a work in progress.

Anyhow, Eliza said that it was not difficult for her because, before she was acting full time, she had been a dialect coach. Ian then joked, “Good, can you coach me then?” I got the impression that Ian’s less than perfect accent was common knowledge, because the panelists had a good laugh at that. He added, “You’ll save the producers lots of money.”

So that was about it. When the moderator wrapped it up, I watched to see if Ian was leaving immediately, and I saw that he was sticking around to do a few autographs. I turned to Robert and said, “We’re going over there now.” By the time I got near Ian, there was the usual skirmish between photographers and autograph seekers, but I held my ground. [Another side note: I don’t get autographs. To me, asking for an autograph is just an excuse to start a conversation with someone I really want to meet, so I’d rather start the conversation by saying something and having their eyes on my face instead of having their eyes focused on a piece of paper. But that’s just me.]

Then the room security said something like “You need to keep moving, people, these guys [meaning the cast, I guess] have gotta get going.” The photographers went away, presumably to be ready to catch the cast at the next venue where they would be appearing. This gave me a clear shot at Ian, so I caught his eye, walked up to him with my hand extended, and said, “Ian, I’m Jane, I’m one of the Sis–” and before I could say “-tahs,” he had my hand in his and had leant over the table to kiss my cheek!!!

It’s like he knew I was coming! [Big shout out to You Know Who You Are Sistah Kathy My Darling.] I have no idea what he said then, but I added, just to be sure he recognized my name, “We’ve communicated on the, uh, internet,” being too flustered to come up with the word ‘email.’ [snort] Anyway, he thanked me for coming, and I told him I couldn’t wait for the show because it was great, and then we all did indeed have to keep moving, so that was that. A woman behind me said something like “What a sweet man.” As it dawned on me what had just happened, I must have been glowing like a 200 watt bulb. I turned to Robert, and he was in awe of me. He told me later that at that moment I squealed, but I have no recollection of that. He was rewarded for his patience by getting to choose what we did next at Comic-con for the rest of the day.