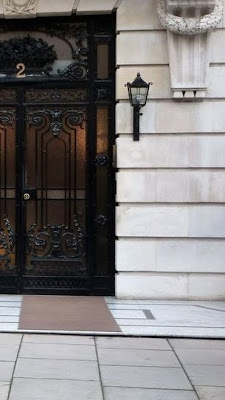 One of my favorite Brits is Nic Roberson, the foreign correspondent who finds himself in war zones plying his trade for CNN. I’m sure he’s heard so many jokes about being the real Nick Danger that he isn’t even polite anymore. Nic’s Wikipedia article includes this wonderful description:

He has won numerous awards, including two Overseas Press Club Awards, a Peabody, a duPont, and several Emmy Awards for his work in war zones and disaster areas around the world. People magazine voted him Sexiest News Correspondent in 2001 but he is better known as a fearless veteran of the world’s conflict zones, including Afghanistan, Bosnia,Kosovo, Rwanda, Somalia, the Darfur region of Sudan, Northern Ireland and both the Gulf War and the Iraq War. During the aftermath of Hurricane Katrina in 2005 CNN sent Robertson to report fromNew Orleans. 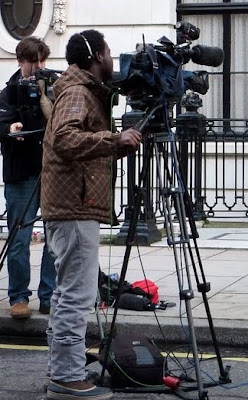 I found a picture of Nic in one of his assignments that I wanted to post. But as the photographer who took it has disabled download capabilities of the photo–that never stopped me–I will honor his wishes and only post enough bits of the photo to make you want to see it in its entirety on Flickr. You can do that here:
http://www.flickr.com/photos/snapperjack/4215430293/lightbox/
I love pictures of actors acting, painters painting, writers writing, even thinkers thinking–so of course, I love this photo of a great reporter reporting. And in addition to that, I really like the looks of Nic in that fine coat.