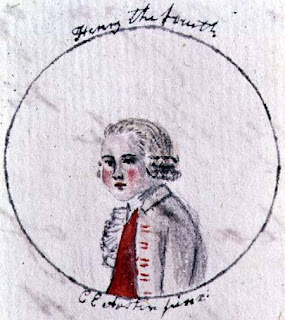 Cassandra Austen was Jane Austen’s sister, and I made her acquaintance through the wonderfully disturbing movie ‘Miss Austen Regrets.’  Here is Cassandra’s rendering of Henry IV for her sister’s manuscript “The History of England.”  If you are wondering why Prince Hal’s dad looks so ill-suited for life in the 14th century, read on–

The two Austen girls were also tutored at home in drawing and the piano. In 1791, Cassandra produced a series of circular illustrations of British monarchs for Jane’s manuscript The History of England, which are noted to have resembled members of the Austen family more than royalty. [Wikipedia]

If you’ d like to read more about the Austen girls’ manuscript, go here–