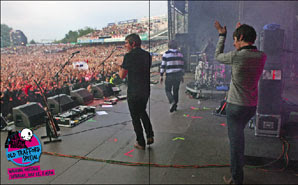 the Arctic Monkeys at Glastonbury, summer 2007

Vernon Reid, leader of the band Living Colour, was asked to provide commentary on 2 films that will be shown at the new visitors center at Bethel Woods, NY, the site of Woodstock in 1969. In speaking of the influence of that event on the future experiences of younger musicians, he articulates a philosophy that has become a religion for me: the need for openness of heart and mind to opportunities that exist in each moment. In other words, in my own spiritual terms, God=Opportunity. That’s all; recognizing the opportunities that lie in our path, often disguised as obstacles, is the same as recognizing this Being or Force or Spirit that is supposed to give cohesion to our lives.

I was only 9 the summer of Woodstock, and I think Vernon Reid was even younger, but he tapped into what became possible that summer when he said, “It was about being where you are, in the moment you’re in, and making things happen as much as you could in that moment. That’s something that’s not tied to any one time period; that’s a value. When my snare drum gets torn, when things go wrong, what do I do next? Woodstock, from beginning to end, was a series of things exactly like that—a production that ran on spirit, will and improvisational experience.” 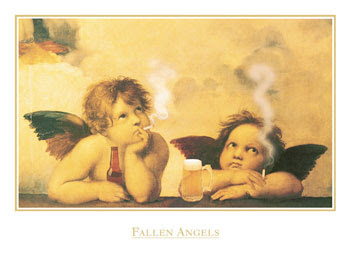 I saw Tim one time when I was home from college, pumping gas into his rusty Buick at the StarFlite while I was sitting in the back seat of my father’s mint green Cadillac in my Sunday clothes. He had gray bags under his eyes, and the beginnings of a gut extruded over his belt beneath his T-shirt. He had puffed up like a rooster to become the overweight redneck his adolescent frame had foreshadowed, but his hair was still dirty black and straight to his shoulders. Our eyes met, and I slid away from the window to the hump over the transmission (which is pronounced even in a Cadillac) so that I made myself into an unapproachable princess stuck up there on the middle of the seat, not even acknowledging that I knew him.

Sid McCarthy was the other kid that was executed that night that I had known. I hadn’t seen him since High school, but I remembered Sid as The Dumb One, a big sweet blonde jock that everyone liked but thought was really stupid. Recently, I had to rack my brain to know how I’d ever had a class with someone as dumb as Sid, but then I remembered that Sid was surprisingly good at math and ended up in my calculus class senior year. He was sort of an idiot savant of derivatives. 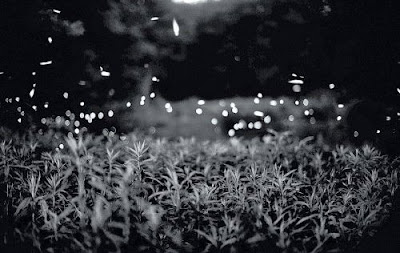 Deidre and I had taken turns driving our mothers on about half a dozen of these jaunts since I moved back from California. She was two years older than I was, so she didn’t pay much attention to me and my friends in high school. But I told her last night when we were planning this trip that I was a classmate of the two guys whose pictures had taken up half of yesterday’s front page. I confided to her that I was particularly uneasy about Timmy Reardon—I’d always felt pretty bad that I had snubbed a lot of people in those days when I decided I was going to California (never to return, of course), snubbed them on principle because they were still here, Deidre included, and I was ready to be anywhere but.

However, since I failed at what I went there to do, I came back to swallow my pride, and for the time being, live with my widowed mother.

I shrugged at Deidre from the front porch where I had been holding the screen door open for about three minutes while my mother disputed something Aunt Cookie, Deidre’s mother, was saying in the kitchen.

Deidre was smart to be in the car. I was sure she already had the air conditioning on full blast because I saw dry wisps of blonde hair blowing straight back from her temples. The AC was so palpable that I almost smacked my lips in anticipation of it. When I stamped my foot impatiently, for Deidre’s benefit only, it was because I knew my mother would never be able to find her missing Cover Girl pressed-powder compact if she was preoccupied, so I prayed silently that Aunt Cookie would just shut up for a minute.

“You count your carbohydrates, not your calories,” Aunt Cookie said, explaining the diet for the second time.

“How do you lose weight if you don’t count calories?” My mother’s voice trailed from the kitchen to the hall, her eyes trained down to any surface where she might have left the compact.

Because you count your carbohydrates, Gracie,” Aunt Cookie insisted, as though my mother were missing the brain cells needed to understand her premise. Each time she repeated her new dieting mantra, her pitch rose and fell like the refrain from a nursery rhyme. Like jack and Jill went up the hill to count their carbohydrates. Like Humpty Dumpty fell off a wall, Humpty Dumpty counted them all.

Finally, my mother found her compact in her other purse, and they were out the door. We now had a two hour drive ahead of us through the flat Carolina piedmont to the old country road known as Antique Row. My sweet cousin Deidre smiled at me in the rear-view mirror, and I smiled back. I suddenly felt very tired. Deidre agreeably kept silent, and I sank down, wedging my head between the seat and the window so it wouldn’t do the dashboard-bobble-head-dog roll that it always did when I slept in cars or on the plane.

At two minutes after midnight the night before, the state electrocuted two men I’d known when I was younger. The two were executed for shooting a family in their station wagon—the mom, the dad, the three kids in the backseat—who happened to pull into the parking lot of the convenience store Tim and Sid had just robbed, momentarily blocking in the getaway car.

One of the men was Timmy Reardon. He had been a kind of thuggy kid that I once liked in that way that adolescent girls say they “like” someone. Tim wore his black hair long, and it separated into greasy strands where it broke against his shoulders. In seventh grade he wore zippered velour shirts that matched his Peter Max corduroy pants, a sure sign that his mother still picked out his clothes. He was my boyfriend for three glorious days that year until he found out my rival Kay Bradley had broken up with her beau. To this day, if I catch the scent of cheap musk cologne in a drug store, it reminds me of that moment with my face against Tim’s chest, the cologne making an odd caricature of the vestiges of baby fat that concealed his chest muscles, just before he walked away from me to Kay’s waiting arms across the school cafeteria. But Tim and I stayed friends, and that year at Christmas he gave me a tiny gold-plated cross on a delicate gold chain. He said that he’d asked his mother to help him pick it out. I wore it even though it turned my neck green, and eventually the little cross was completely encrusted with a pale husk of aquamarine brine. 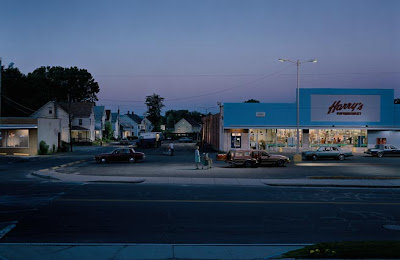 “Thank you, Estrella,” I say to the maid as she hands me a fresh cup of coffee. “By the way, you did a marvelous job on the rug.” Her brown eyes tell me I’m welcome. I stroll through the dining room to the living room and stop momentarily at the faint ring of blood on the carpet where the baby was born two days ago into my hands before the paramedics arrived. My wife is here, just home from the hospital, holding the baby with my stepdaughter and my son from my first marriage looking on. Three years ago today I would have been standing here alone with my coffee, contemplating an empty couch, an empty room, a divorced man in his big new old house with the sparse furnishings his ex-wife would let him have. It is not a weekend; my son would not have been here on a weekday three years ago. He would have been in school.
Now there are five people here in this house who love me, if you count the baby, four in this room and Estrella, it has just dawned on me, in the kitchen. Should I say it out loud? “Three year ago I would have been standing in this room alone. Now there are four people here who love me, if you count the baby.” My wife smiles up at me from the couch and says, “Ummm.” My boy and the little girl take their eyes off the baby’s face for a moment, look at me, and wonder if I’m going to cry or say something else. The baby continues to breathe.
I’m standing in this room of perfect love. At this minute my family is poised before me like a snapshot of all my desires being fulfilled. I am struck by a vision of Estrella kneeling behind my wife and supporting her as the baby is pushed out into my trembling hands, Estrella’s smooth brown hand calmly stroking the side of my wife’s face. She is whispering a prayer in Spanish.
It will be another year before I sleep with the maid, and one of those times will be just inches away from the very stain the baby’s birth left on the carpet. When my wife finds out and I tell her it meant nothing she will say, “She is our maid, for God’s sake. You screwed her in the afternoon and three hours later you sat here and ate the meatloaf she made for dinner. How can you compartmentalize your life like that?” She will be pointing at the head of the table where we eat, but my eyes glide past her hand to the floor. I can’t answer her. By then I will have realized that desires are never fulfilled; they are only temporarily satiated.
In five years we will try to have another baby. My firstborn son will be married, and my wife will turn to me as we leave the church, the gleam of hope in her eyes utterly crushing me. During the ceremony she prayed to be pregnant, she will tell me. At that moment I will pray that Estrella, who is no longer our maid but still my lover, is not.
In ten years I’ll be diagnosed with inoperable cancer. Close to the end, I will tell my wife she and the children are going to be all right without me. My wife will cry, “No, I won’t. We were supposed to spend the rest of our lives together.”
“This is the rest of my life.”
But Estrella will tell me with her eyes the very last time we make love, “I will know you beyond the grave.”