This is a loooooong interview but well worth the listen.  Filled with thought provoking questions and thought-provoked answers.  Post Thor, pre-Avengers.

Maroon 5 did a cover of “Pure Imagination” from Willy Wonka and the Chocolate Factory and it is the most seductive children’s song I have ever heard. 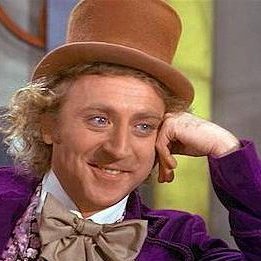 Famed jazz pianist Dave Brubeck died on December 5, 2012 – one day before he was to turn 92 years old. Brubeck, who is best known for his performance of “Take Five” (written by Paul Desmond) from Time Out which became the first million-selling jazz album in 1959, was at the forefront of modern jazz. (He would be featured on over 100 albums during his career.)

He formed his quartet in 1951 and became the first jazz artist to be featured on the cover of Time magazine. Prior to World War II Brubeck was headed for a career as a veterinarian at the University of the Pacific. However his professor told him “Brubeck, your mind’s not here. It’s across the lawn in the conservatory. Please go there. Stop wasting my time and yours.” He transferred to the music program, only to be threatened with expulsion because he couldn’t read music. (He was allowed to graduate as long as he promised to never teach piano.)

Brubeck, whose mother was a classically trained piano teacher, first made his mark during World War II when he served under General George S. Patton, mainly as a musician. He was part of “The Wolfpack” the only integrated band in the armed services. (Following the war he would challenge societal norms, often performing at black jazz clubs in the South.)

Note: In March 2011, the drummer on “Take Five”, Joe Morello, was featured on Obit of the Day.

(“Take Five” and the album Time Out are copyright of Columbia/Legacy Records, 2009)

BBC The World’s Worst Place to be Gay 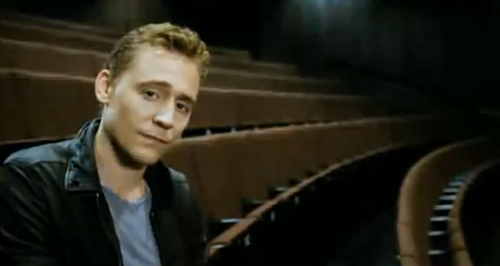 Tom hadn’t seen her in years. He found himself trying to remember when they had been inseparable. Lord, they’d been young. Bonding instantly in that small theatre company. Then, Hollywood had cast it’s spell upon her and she’d become a highly acclaimed director and screen writer. Sure, they’d stayed in touch. For a while. But then, as life usually does, careers and choices forced them to drift apart. Finally, it had become just brief emails sent on holidays and birthdays. On this night though, fate had brought them together. A Hollywood party was set to play host to their reunion.

He watched her from across the room. Parties had never really been her thing, but she greeted everyone who spoke to her with a soft smile that didn’t quite manage to reach her eyes. Tom thought she looked tired. No, that wasn’t the right word. More like exhausted. Even from this distance he could see the dark purple smudges under her eyes, and he found himself wishing to ask when she’d last slept. This creature before him was a pale shadow of the once vivacious, raven haired woman he’d known.

“I had a feeling you were going to follow me.”

Stella’s voice sounded hollow as Tom stepped up beside her at the balcony railing.

“I wasn’t even sure that you saw me.”

Her chuckle was wry, as she shook her head.

“Tom, of course I saw you. The atmosphere changed in the room as soon as you walked in. You’ve always had that effect.”

He watched as she stared out at the twinkling lights below, refusing to meet his gaze. The silence hung thickly in the air between them.

For the first time, she turned to look at him. Tom wasn’t prepared for the pain in her green eyes. Stella looked utterly defeated, as though the spark inside her had been extinguished.

He reached for her, but she pulled back.

As her eyes met his, he saw tears glistening in them, and his heart constricted painfully.

“Talk to me, please darling.”

“I can’t. I really need to go.” The look of sheer panic on her face startled him.

“Sure. Of course. Uhm, I’m here for a while… maybe we can talk later.”

Stella sighed, biting her lip. “Yeah, the numbers the same.”

Tom watched in complete confusion as she rushed back into the party, nearly knocking over a waiter. He’d never seen someone want to be away from him so badly. Especially someone who used to be so important to him.

Tom couldn’t get Stella out of his mind. The undeniable sadness and anguish in her emerald eyes made his heart ache. He couldn’t understand what would make this talented and successful woman so sad, and it worried him. To further add to his new found concern, she’d failed to return any of his phone calls. That left him with only one option, and he prayed he wouldn’t regret this decision. Her address was still the same, and as he stood at her door, he tried his best to figure out what to say. Tom knocked tentatively, not expecting her to answer, so when the door swung open, he was shocked. Not only that she answered, but at her appearance. The purple bruising under her eyes was even darker. Her pupils were dilated, as though she were under the influence of something. She looked completely disheveled.

“What are you doing here, Tom?” Her voice was devoid of any emotion.

“You didn’t return any of my calls, darling.”

She sighed, her green eyes reluctantly meeting his.

“Stel, can we please talk?”

Stella ran a hand roughly through her ebony locks as she stepped aside to let him enter. For some reason Tom was surprised to find the tiny apartment immaculate. The woman before him looked like her whole world was caving in, and yet her inner sanctum was pristine. He watched as she sat down in a chair, pulling her knees to her chest, effectively folding in upon herself. Suddenly unsure of himself, he sat down across from her. Once upon a time they had been the best of friends, friends who could share anything, and now they were reduced to sitting in awkward silence. He studied her, hoping to find some clue, some tiny spark of his Stella buried deep down.

“YOU wanted to talk, Tom, but all you’re doing is staring.”

“I think the question you are looking for is, what happened to you?”

“Nothing. Everything. I don’t know. It’s not like I woke up one morning and everything sucked. Although, sometimes it seems like that’s how it happened.”

She let her eyes drift from the floor to his face.

“I feel like I owe you some sort of explanation, but I don’t have one. How do I explain the desire to cease to exist to someone who is so damn optimistic and good?”

Tom watched as she picked up a pill bottle and shook three out into her hand. she swallowed them down without water. Stella noticed him watching and chuckled.

“Is that why you ran away from me at the party?”

Stella nodded. “I didn’t expect to see you there. I didn’t know what to say. That’s also why I haven’t returned your calls. I’m sorry, Tom.” Her voice broke as tears threatened to spill from her eyes.

“Every morning when I wake up, I find myself disappointed that my eyes open. That these fucking lungs are drawing a breath? Why do I feel this way? I have no idea.”

The tears poured down her pale cheeks. Tom was unsure if he should go to her or not. All he wanted was to hold her until her pain went away. He crossed the small space in a couple easy strides, and knelt in front of her. He took her tiny hands in his and that’s when he noticed the scars and the fresh angry cuts on her forearms.  But the scars that frightened him the most ran from her wrist to her elbow on both arms, and clearly had taken a number of stitches to close. Gently he stroked her skin with his thumbs.

“Please … don’t look at me. I can’t take it. I’m disgusting. You should turn around and walk right out that door before I taint you with my darkness.”

Carefully, he pulled her down into the floor with him, and wrapped his arms around her.

“I’m not going any where, darling.”

Tom held her tightly as she sobbed. He closed his eyes and let his heart shatter as he felt her raw pain. Stella had always been so vibrant and full of life. She’d always made him laugh, so to see her like this, devastated him. He brushed his lips against her temple. He had no idea how to help her, but if it was the last thing he did, he would find some way.

I’m really excited about this fic.  It has the potential to be awesome as well as bring up some really disturbing subjects that are well worth addressing, for example, What does misery do when confronted with optimism?, and vice versa.

And I like your blog, girl.  I’m all about how awesome crows are, so maybe I’ve found a kindred spirit!?

What’s he that wishes so?

My cousin Westmoreland? No, my fair cousin.

If we are marked to die, we are enough

To do our country loss; and if to live,

God’s will, I pray thee wish not one man more.

By Jove, I am not covetous for gold

Nor care I who doth feed upon my cost;

It yearns me not if men my garments wear;

Such outward things dwell not in my desires.

But if it be a sin to covet honor,

I am the most offending soul alive.

No, faith, my coz, wish not a man from England.

God’s peace, I would not lose so great an honor

As one man more, methinks, would share from me,

For the best hope I have. Oh, do not wish one more!

Rather proclaim it, Westmoreland, through my host,

That he which hath no stomach to this fight,

Let him depart. His passport shall be made,

And crowns for convoy put into his purse.

We would not die in that man’s company

That fears his fellowship to die with us.

This day is called the feast of Crispian.

He that outlives this day and comes safe home,

Will stand o’ tiptoe when the day is named

And rouse him at the name of Crispian.

He that shall see this day, and live old age,

Will yearly on the vigil feast his neighbors

And say, “Tomorrow is Saint Crispian.”

Then will he strip his sleeve and show his scars,

And say, “These wounds I had on Crispin’s day. 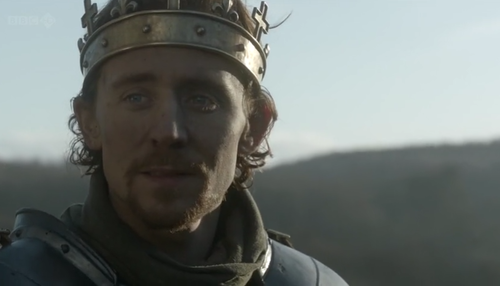 I was not angry since I came to France

Until this instant. If they will fight with us, let them come down,

Or void the field; they do offend our sight:

If they’ll do neither, we will come to them,

And make them skirr away, as swift as stones

Enforced from the old Assyrian slings:

We’ll cut the throats of those we have,

And not a man of them that we shall take

Shall taste our mercy 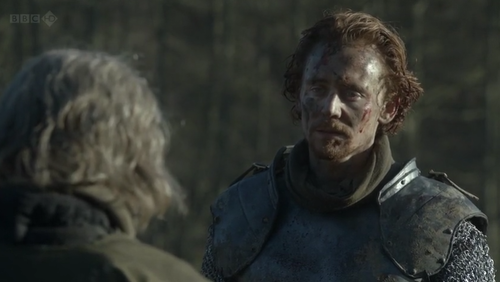 I was not angry since I came to France until this instant.

Oh thank you for including this–I’ve been waiting to see if you would.  I think this is my favorite line in Henry V, especially the way Tom Hiddleston delivers it, because it shows such a timeless portrayal of frustration.  I can imagine an English tourist standing next to me on the streets of Paris, looking at a map or trying to hail a taxi, saying this very line today, and he wouldn’t seem a bit out of place!

Lifting her face up to his, he kissed her.