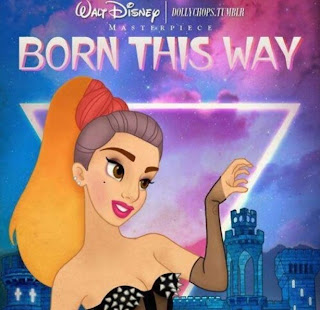 I got this from someone’s Tumblr [Dollychops.tumblr?], and it is a fabulous re-imagining of Lady Gaga as a Disney princess.

When I was really young, Disney soundtrack compilations on vinyl LPs were available in some gas stations as premiums if you filled up your tank.  I think it was Gulf?  Man, I wish I still had those, but after years of play on the portable record player, they would probably be unbearable.