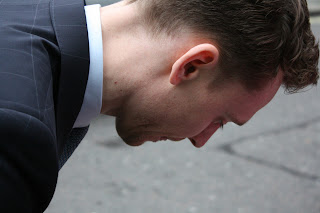 OOPS!  I forgot to post yesterday because I was busy at Comic-con doing things like, oh, meeting Henry Ian Cusick!!–I’ll give that amazing experience its own separate post later….

Anyhoo, this post is for Friday, and the internet is all aflutter because some people are 100% certain that they believe this fella ^ will be at Comic-con today.  People have been in line since 6 o’clock last night for a panel that that starts at 6 o’clock tonight that he will probably be involved in.  I haven’t seen a single picture of him in San Diego on Tumblr yet, so I’m a tad skeptical, but it doesn’t matter either way, because I’m not getting in that line.  My only hope is to see him just walking around the convention center like a normal person. Right. And if he happens to be in the Nintendo Lounge or the XBox lounge while my son is playing video game demos and he sits down next to me while I’m on a comfy couch reading my Batman novel, all the better.