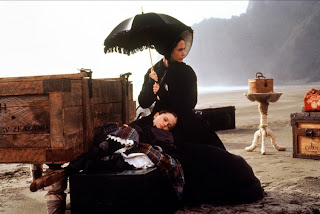 How about a two-fer:  today’s Brit can be American actress Holly Hunter’s character, Scotswoman Ada McGrath, in the groundbreaking 1993 film, ‘The Piano.’  And Wednesday’s can be Anna Paquin, the Canadian-born New Zealand actress who played her daughter.  Anna was the second youngest ever winner of an Academy Award when she won Best Supporting Actress for her role in ‘The Piano.’