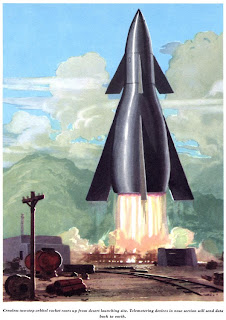 I’ve been working on a piece for the Saturday Editor’s Choice part of the blog about a British-American artist, illustrator and author named Jack Coggins.  I’m not finished with it, but here’s a great example of his work and a little bit about him from the Wikipedia–

The contact with such visionary thinkers complimented his exposure to the German V-2 rockets in Europe and served to strengthen his growing interest in space travel, rockets, and science fiction.[1] In 1951 and 1952, Coggins collaborated again with Fletcher Pratt on two classic books: Rockets, Jets, Guided Missiles & Space Ships, and By Space Ship to the Moon. The books were released amidst the great wave of interest in space travel sweeping the United States and the rest of the world in the 1950s,[1] and they were published in several countries and translated into other languages.[30] These books made the prospect of space exploration seem a practical possibility. National Aeronautics and Space Administration (NASA) scientists used the books to demonstrate their ideas to Congressmen when seeking funding for the space program,[2] and there are many NASA scientists today who retain fond memories of the influence the books had on their careers.