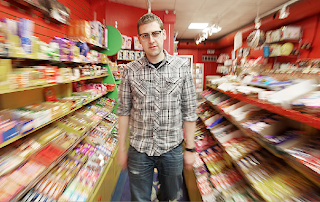 All of the Brits have turned to face West as they raise their hands in applause for their Canadian cousin, Jeff Lemire.  Jeff has just finished a 40 month run as creator/author/illustrator of the comic series “Sweet Tooth.”  Three and a half years is a long time to preside over a fictional universe as the lone god, folks.  I would try to tell you what Jeff’s work has meant to me, but no one could say it better than Damon Lindelof, Jeff’s friend and sometime collaborator, in an interview with Jeff that he conducted for Comic Book Resource.  Here are Damon’s introductory remarks in their discussion of the final issue of “Sweet Tooth.”–

I just found myself feeling both enormously happy and enormously jealous that you had executed at such a high level and I offer my sincerest congratulations because I feel like you stuck the landing perfectly. There is no splash going into the water and I think this is the final nail in the coffin of a book that is going to live on for decades to come.

That, coming from one of the guys who wrote the finale of “Lost”–which was another ball that got hit out of the park, in my opinion.  Later in the interview, Jeff speaks about how “Lost” managed its themes in the same way he wanted to present his story.–

You can probably understand this from “Lost” — “Sweet Tooth” was never about the secret of how the hybrid children came to be or the secret of what the plague was or any of that stuff. That was all way down on my priority list. It was always about where Gus ended up, and the characters ended up. Much like you did on “Lost,” revealing the secret of the plague and all that was never really something that I cared all that much about.

“Sweet Tooth” # 40 hit the stands last Wednesday.  The series in its entirety will probably be in print for a long time.