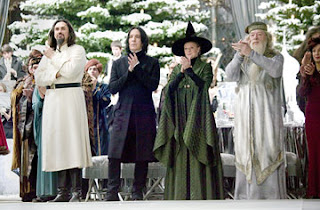 Professor Snape and colleagues applaud the writers who have lent their support to the Occupy Wall Street movement at occupywriters.com.  This contribution from Lemony Snicket is brilliant–

Thirteen Observations made by Lemony Snicket while watching Occupy Wall Street from a Discreet Distance
1. If you work hard, and become successful, it does not necessarily mean you are successful because you worked hard, just as if you are tall with long hair it doesn’t mean you would be a midget if you were bald.
2. “Fortune” is a word for having a lot of money and for having a lot of luck, but that does not mean the word has two definitions.
3. Money is like a child—rarely unaccompanied. When it disappears, look to those who were supposed to be keeping an eye on it while you were at the grocery store. You might also look for someone who has a lot of extra children sitting around, with long, suspicious explanations for how they got there.
4. People who say money doesn’t matter are like people who say cake doesn’t matter—it’s probably because they’ve already had a few slices.
5. There may not be a reason to share your cake. It is, after all, yours. You probably baked it yourself, in an oven of your own construction with ingredients you harvested yourself. It may be possible to keep your entire cake while explaining to any nearby hungry people just how reasonable you are.
6. Nobody wants to fall into a safety net, because it means the structure in which they’ve been living is in a state of collapse and they have no choice but to tumble downwards. However, it beats the alternative.
7. Someone feeling wronged is like someone feeling thirsty. Don’t tell them they aren’t. Sit with them and have a drink.
8. Don’t ask yourself if something is fair. Ask someone else—a stranger in the street, for example.
9. People gathering in the streets feeling wronged tend to be loud, as it is difficult to make oneself heard on the other side of an impressive edifice.
10. It is not always the job of people shouting outside impressive buildings to solve problems. It is often the job of the people inside, who have paper, pens, desks, and an impressive view.
11. Historically, a story about people inside impressive buildings ignoring or even taunting people standing outside shouting at them turns out to be a story with an unhappy ending.
12. If you have a large crowd shouting outside your building, there might not be room for a safety net if you’re the one tumbling down when it collapses.
13. 99 percent is a very large percentage. For instance, easily 99 percent of people want a roof over their heads, food on their tables, and the occasional slice of cake for dessert. Surely an arrangement can be made with that niggling 1 percent who disagree.